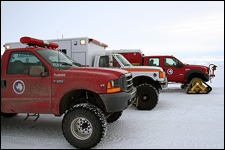 About The Antarctic Fire Department

The AFD is responsible for all emergency response for the USAP, including fire, rescue, EMS, Hazmat, and other emergency situations. If someone calls for help, the AFD responds.

In addition to protecting USAP operations, the AFD also provides mutual-aid response to the volunteer fire brigade at nearby Scott Base - New Zealand's research station. 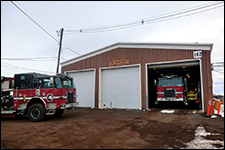 Personnel are assigned to serve at both stations at McMurdo and on each piece of apparatus on a rotating basis. Those assigned to south pole station remain at the south pole for the duration of their assignment.

At McMurdo, 13 pieces of apparatus are operated and housed at two separate stations. Station 1 (Headquarters) is centrally-located within the urban sprawl of McMurdo Station. Station 2 is located at McMurdo International Airport and covers the Ice Runway, William's Field, and Pegasus Ice Runway airfields for the USAF. 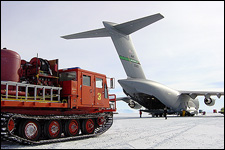 The apparatus at station 2 are distributed and dispatched to the different airfields depending on the current flight activity.

AFD's personnel come from all over the United States and from varying backgrounds in the fire service. In addition to their previous experience in the fire service, the one thing they all have in common is their appetite for adventure.

The Antarctic Fire Department poses a challenging, but rewarding opportunity for firefighters across the nation. AFD Firefighters are employed on a contractual basis, serving anywhere from 3-13 months on the ice for each deployment.

We've had probie's fresh from the academy to seasoned vetrans serving side-by-side on the AFD supporting world science. This experience in itself creates an even stronger bond between these brothers than is normally found in the firehouse - this is the experience of a lifetime.

About Other Organizations In Antarctica

The NSF manages the program under guidance of a Presidential memorandum that directs an "active and influential presence in Antarctica designed to support the range of U.S. Antarctic interests."

Since 1956 Americans have been studying Antarctica and its interactions with the rest of the planet. Research disciplines include glaciology, biology and medicine, geology and geophysics, oceanography, climate studies, astronomy, and astrophysics. Contractors and units of the military provide operational support.

The National Science Foundation (NSF) is an independent federal agency created by Congress in 1950 "to promote the progress of science; to advance the national health, prosperity, and welfare; to secure the national defense..."

With an annual budget of about $6.06 billion, the NSF is the funding source for approximately 20 percent of all federally supported basic research conducted by America's colleges and universities.

The main function of LM ASC is to provide support to the United States Antarctic Program, which is dedicated to sustaining the Antarctic environment and funding scientists who conduct research in Antarctica.